For inveterate pessimists being wrong is often a cause for celebration. Because it means a good thing could happen despite the resistance of one’s own sceptical self.

This time I was proven wrong as to my long-standing aversion for historical biographies. Those piles of dates & facts..., those pages filled with human pettiness and with (worse even!)great (horrible) deeds - none of it all redeemed by beauty... (1) No thanks. What I looked for in books were the timeless qualities of Art, the illuminations of Meaning, no less. Didn’t I already have the papers for my daily dose of nasty facts?

So when I browsed through the books on offer at the entry of a museum devoted to the collections of a former burgomaster of Antwerp, I confess I quickly discarded the biography of this respected citizen (however nice his name - "Rockox" ). I was there for the paintings & their ageless sensibilities (2) not for the vicissitudes of socio-political history.

How a 'burgomaster-book' proved me wrong!

But the burgomaster-book (3) and I got a second chance, later at a Brussels bookshop, when it managed to overcome my prejudices – after all, it was written by two art historians (which always bodes well for meaningful insights(4)), it did cover a momentous epoch in European history (1560-1640, when pious protestants clashed with catholic zealots) , and there were even some pictures of paintings in it!

And so, here I am, 10 days and more than 300 pages later – captivated by this story of citizens caught amidst the turbulence of sectarian and political strife …

Of course, I had learned long ago about the horrors of the Eighty Years' war, the Iconoclasms, the Spanish fury, etc etc ... But somehow I had always passed over all that misery as merely part of the general brutish & backward spirit of older times. (5) And now this book had me reading letters of men and women of that time – so reasonable & wise , so deeply concerned about the miseries of war, so compassionate in their evocations of other peoples’ suffering, so downtrodden yet dignified when describing their own ill-fortunes – how alive and contemporary these voices sounded, how sensitive ... (6)

And as to my previous notions of Antwerp at the close of its golden age - they too were exposed by this book as being quite superficial, limited as they had been to impressions of baroque splendour & vainglory. Never had I really bothered to imagine how, perhaps even more than the Catholic propaganda efforts, it were civic resilience and a staunch dedication of local citizens to decency and culture that could resuscitate the cosmopolitan and cultivated-humanist climate of "pre-fall" Antwerp.

"Enlivening what otherwise would have remained dead"

The evocative power of this book is in fact astonishing – "enlivening what otherwise would [have remained] dead"(7). Very concrete details make one feel as if one gets a peek at daily life as it was. Well chosen extracts from documents & letters let one read over the shoulder of the local citizens, judges, poets, priests, ... The political twists & turns of the time are commented using quotes of the best historians. And the book allows one to savour the courteous, even affectionate, exchanges between the leading humanist intellectuals of those days, so much so that one ends up feeling their privileged contemporary when looking at the pictures of the paintings they ordered.

And, at times, there’s also a glimpse of the authors themselves, assiduous & sensitive historians-biographers plunging into yet another musty archive to uncover documents shedding light on their subject. One may even catch them musing, not without melancholy, about the vanity of some family-archives, which tirelessly document names & titles & possessions & litigations & marks of honour, without however having kept the slightest trace of a personal thought ...

Ending on a positive note or a glum conclusion?

But then, what about our burgomaster, Nicolaas Rockox? We got to know the events and some of the people that marked his epoch and his city. (8) We got an idea of the kind of families he and his wife came from. We can see his portrait (painted by the best artists of his time) and that of his wife. But what do we know about him personally? He didn’t leave any personal notes either....
And yet, the book’s authors have gathered so much collateral proof.... of his honesty, his faithfulness, his generosity, his love and patronage of the arts, his sense of responsibility. So yes, one does get an image of a good man, a man wanting to leave something of permanence for his city, reaching out to later generations. (9)

So this post should end on a positive note! His good intentions did make it to the 21st century: there’s his house, some of the art works and coins (10) he collected, and even certain student grants he founded still linger on.
But of course, in keeping with the spirit of this blog – here’s a glum, moralizing conclusion anyway: they don’t make men like Rockox any more ... neither in politics nor in business life. 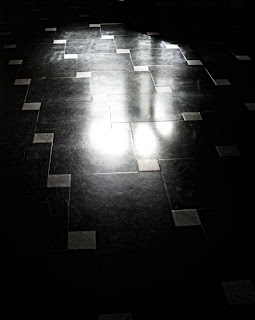 lots of nicely numbered notes
(1) “Assuming that history is nothing but the miserable story of mankind’s eternal ups and downs, the spectacle of sound and fury “may perhaps be moving for a while; but the curtain must eventually descend. For in the long run, it becomes a farce. And even if the actors do not tire of it – for they are fools – the spectator does, for any single act will be enough for him if he can reasonably conclude from it that the never-ending play will be of eternal sameness.”” (Kant as quoted by Hannah Arendt)
(2) That crucifixion by Cornelis Matsys! The stark drama of it, with the dark clouds packed above Golgotha ... , and with the poignant contrasts amongst the spectators : the mocking crowd surrounding the crucified on the top of the hill while further down there’s not only the group of despairing faithful, supporting the fainting Maria, but also the indifferent foursome playing dice. And somehow, the distance between the mourning group and the crucifixion marks even more the desolateness and the loneliness of it all.
(3) Leen Huet & Jan Grieten: “Nicolaas Rockox – 1560-1640 – Burgemeester van de gouden eeuw”
(4) More than mainstream historians, art historians seem to be blessed with a precious mix of erudition, intuition and taste, which turns them into particularly reflective spectators. Perhaps the kind of spectators of whom Arendt could say “The spectator, not the actor, holds the clue to the meaning of human affairs”
(5) It’s a smug human bias – always attributing less sensitivity to people who are further away from us (in time or in geography). This of course conveniently allows us to live happily in a world where there has always been, and still is, too much suffering.
(6) And also , how alike these 16th & 17th scenes of sectarian discord & upheaval are to the daily reports one can read about the conflicts raging in too many parts of our world, where decent and sensitive men and women are likewise made to suffer by the violent.
(7) one of my favourite quotes of Panofsky about the task of the humanities: "The humanities [...] are not faced by the task of arresting what otherwise would slip away, but of enlivening what otherwise would remain dead. [...] they penetrate into a region where time has stopped of its own accord, and try to reactivate it. [...] thus endowing static records with dynamic life "
(8) We, as individualist romantics, would of course rebel at being summed up by just our age and our career, without taking into account our precious individual thoughts & feelings
(9) Ever so delicately, the authors choose to have “only” a sketched portrait of Rockox on the book-cover, because, as they say, they felt they could not get so close to him as to warrant a full-colour oil-portrait.
(10) Coins! Did you think old coins were boring? Not in this book! Our authors manage to combine the zest of an adventure story about a treasure of coins dug up by a poor labourer with the gravitas of an evocation of a 17th C cercle of humanist collector-friends for whom the coins' iconography leads right back to Antiquity.
Posted by Ffflaneur

and i am still waiting for a book to redeem me, like it happened to you in this case :-) actually when i saw the title of your post, i almost jumped with joy (and astonishment!) since i had been planning a post with exactly this topic for a year now, but i was lazy and somehow never came to write it (it meant writing too, not just showing the pics). that Kant-quote is awesome, perhaps i will steal it from here if i ever come to make that post :-)
oh, not to mention the not-in-the-least frivolous delight of the picture, i immensely like it, at first it seemed to possess some strange tridimensionality too, as if there had been a staircase in the foreground...

well, actually, dearest R, - when I copied the Kant quote it did remind me of what you had once said about history just piling horrors upon horrors ....


I look forward to your counter-attack!:-) (a tip : for a killer, just combine the kant quote with Benjamin's angel of history insight ..... )


as to the photo: how incredibly perceptive you are!!! on the original photo there was indeed a staircase in the background .... I cropped it, to keep just the reflection...

and i found something too, a quote fitting into your recently developping history defender stance:


"Anything can deliver us from our lost memory of the soul; science, history, art, or the sunlight on the grass taitami mats in the Zendo. And anything can enslave us: science, history, art, or the militarism of a Zen monastery. But if we are lost in time and suffering racial amnesia, then we need something to startle us into recollection. If history is the sentence of our imprisonment, then history, recoded, can become the password of our release."


i confess i am still in the 'sentence of our imprisonment'-stage :-)

a fabulous quote dear R - the full ambiguity of history is there ... I cannot but echo it :"If history is the sentence of our imprisonment, then history, recoded, can become the password of our release"

but so, the "recoded" is essential ... and for proper "recoding" one surely needs sufficiently sensitive, imaginative, disinterested-yet- empathic historians ...

and i like even better that notion of "(lost) memory of the soul"...

anyway, isn't it great we can supply each other with quotes that shore up, not our own, but the other's opposing opinion? ;-)