Where to fit in Bruegel?


There's this neat illustrated art historical timeline in my head, one in which all western art works can snugly find their place according to time, place, subject matter. But Bruegel has always been a nuisance : where to fit him in?
Born around 1525, he should qualify as a renaissance artist, but in vain one looks for antique gods or heroes or columns in his work. If he's to be pinned down as a local Netherlandish genre painter,  then what with all those dazzling land- and seascapes, stretching far beyond the northern horizon?
Or is he perhaps a comic painter? But what kind of comedian conjures up armies of grinning skeletons roaming a scorched earth? Where's the humour of a  Mad Meg/Dulle Griet on a plundering binge in a blazing red hell?

There are loads of books on Bruegel's art  – each with its own angle, its own prejudices, reflecting  the era and the agenda of the writer.
Bruegel has been treated with  contempt as  a peasant painter impervious to noble renaissance ideals, he has been framed as a Flemish rebel denouncing Spanish oppression. His village winterscenes and rowdy peasant meals & dances have been reproduced a zillion times on postcards, restaurant naps, invitations for Breughelian eating feasts.
(Post)-moderns have hailed him as an inclusive & subversive  painter showing  real life & real people instead of glorifying the  ruling classes.

Leen Huet's masterly book on Bruegel ("Pieter Bruegel - De Biografie" ) is in many respects  as un-classifiable as Bruegel's work itself, and equally fascinating through its richness of details and its panoramic reach.
It's called a biography, but what kind of biography can one write, when no personal letters or diaries survive, when verifiable personal facts are scarce?
Huet's approach is based on unrelenting  attention to Bruegel’s works coupled with a multi-faceted evocation of his world.
And interpolating between his works and his world, one indeed comes tentalisingly close to the man, that is, to his creative imagination, his “vital interest”, his sensibilities.

Huet lets us almost smell the stimulating 16th Century Antwerp environment of humanists, editors & printers : “the smell of ink, wood and pigment drifted through the street, in each house Bruegel heard the creaking of the printing presses”.  She also paints a fascinating portrait of some of Bruegel’s patrons and friends. Such as his first Antwerp master, Pieter Coecke (1) : an entrepreneurial, adventurous and erudite man, who, not even 5 years after the Turks stood at the “Gates of Vienna”,  undauntedly travelled to Constantinople, which resulted in a fascinating series of panoramic prints of the city . A later patron & friend, Abraham Ortelius, a Flemish mapmaker, was to became famous with the “first modern world atlas”.

Her evocation of Bruegel’s two year tour of Italy lets us travel over the Alps, watch over Bruegel's shoulder as he sketches landscape scenes that catch his eye or as he discovers the works  of Italian masters. Though there is little Italian renaissance idealised beauty to be found in Bruegel’s work (“his visual imagination came to very different solutions”), Italian manners did find their way into his work, but strictly on his own terms (2) .

It is one of the merits of this caleidoscopic book to have its readers wonder about how 16th C Northern Europeans came to terms with the tumultuous international and local politics of the time. 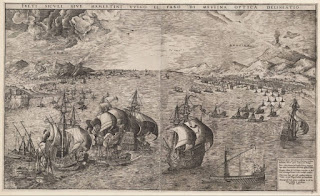 When Bruegel’s compatriots saw his famous print "Naval Battle in the Strait of Messina" ,  showing a battle between Italian and Turkish ships in the Gulf of Naples, did they worry about the possible repercussions of this Mediterrenean unrest on the rest of Europe? Or did they merely marvel at the dashingly detailed representation of those spectacular ships?

Huet opens up vertiginous  historical vistas when describing Bruegel’s friendship with a succesful immigrant artist in Rome, Don Giulio Clovio, whose life seems to sum up the Central & Southern European  political   predicaments of that time. He was born in Croatia where his parents had found refuge, fleeing the advancing Turkish troops in Macedonia. He then found employ in Hungary, but  had to flee when his patron-king  lost a major battle against the Turks. When he eventually arrived in Rome, this was not the end of his travails: he was molested by imperial soldiers during the 1527 Sacco di Roma.

Together with Huet one cannot but speculate whether his conversations with this Giulio Clovio inspired some of Bruegel's pessimism?
Or was his pessimism mostly fed by the mounting uncertainties and the religious strife  in Northern Europe?

As an historian, Huet cares about facts, and she notes how the dates of Bruegel’s life (1525?-1569)  and works are difficult to reconcile with the hypothesis that  Bruegel’s paintings (such as the "Massacre of the Innocents") denounce particular Spanish war crimes. (3)

But Bruegel obviously  witnessed the growing tensions between protestants/calvinists and catholics.  As an agelong European catholic unity was coming to an end, he too may have worried:  “what can preserve the peace in these countries?”

So, no need to pitch Bruegel as a “propagandist for this or that party” -  perhaps he rather was “a philosophical observer”, whose “understanding of human nature” (and of its depravities in particular) resulted in visionary paintings.

But how to cope with the infinite bleakness of some of these paintings? Gazing into the blazing sulphurous hellish reds of the "Mad Meg" (DulleGriet) – is this unredeemed horror? Or is she a farce, this giant madwoman?
Or take the  "Triumph of Death" where the horrified eye bounces from one ghastly detail  to another - seeking for some glimmer of hope, but none is to be found, except, perhaps, in the pale dawn on the horizon?

Then again, could it be that we (post)-moderns, deprived of the consolations of religion, exaggerate the pessimism in these paintings?  “The paintings probably reminded his fellow Christians of the perspective offered by the resurrection; thus offering hope instead of melancholy.”

Or maybe we are too sensitive – too much of the weeping Heraclitus instead of the laughing Democritus. What was the 16th century sense of humour like? Huet adduces  Montaigne, who preferred Democritus’ laughing mockery of human vanity and folly to Heraclitus’ earnest compassion, because as humans “we are less evil than dumb”, not really deserving esteem & respectful compassion.

A humanist abundance of details 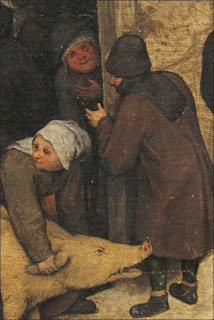 Huet also aptly mentions the then widely published Erasmus (when not censured) as one of the intellectual influences of Bruegel’s time.  There’s of course his ”In praise of folly” which offers further insight into the Northern renaissance satirical state of mind: “what a spectacle, what a jumble of fools”

And,  strikingly,  there is Erasmus’ work called  “ A double  abundance of words & things”  - which advocates the use  of abundant variation, in subject matter and in expression,  to communicate and to charm.
Witness the dizzying number of proverbs represented on a single painting by Bruegel?  Witness the many “tätig kleine dinge”, so typical of Netherlandish painting ...?

No detail of human activity is unworthy of attention.   Humans in  their most banal aspects are worthy of representation.  Is that why in Bruegels’s paintings, the central element so often almost vanishes amidst a swarming mass of figures, all getting equal attention (4)?

Now, about these swarming humans, does Bruegel in fact poke fun at his peasants? Are they held up as moral examples certainly not to follow -  with their hardly conceiled sexual lust, with their unabashed gluttany ? Partly, perhaps, but then again, the  aristocratic customs of the time were hardly any more ascetic, as Huet dryly evokes in a hilarious counterpoint (5) .

Maybe Bruegel (6) , his contemporaries, and we ourselves,  just take genuine pleasure in the representation of a great many of  human beings, who are all doggedely going about their daily business, even when miracles or tragedies are unfolding somewhere in the background.

Maybe we all like to watch the human spectacle, how it unfolds in an unending range of poses & manifestations, in different landscapes and settings.

Maybe we all quite like the way in which Bruegel's elusive & philosophical paintings allow us to meditate also upon our current predicaments.

(1)   One marvels at the seemingly self-evident multi-linguism of the time.  Coecke for instance  published guidebooks in Flemish on antique architectural principles (compiled from  both antique Latin and contemporary Italian source texts), which he valiantly translated into French himself while at the same time ordering a German translation.  Huet’s Bruegel-book would definitely deserve a similar multilingual dissemination.
(2)    With a fine feeling  of paradox Huet wonders whether Bruegel might perhaps be the ultimate mannerist – borrowing for example refined Italianate gestures for a sturdy peasant  robbing a nest, or reapproriating  an invention  from a Titian wood print (a formidable winding tree trunk) as a characteristic compositional feature for his own landcapes (the repoussoir tree).
(3) Bruegel still lived  to witness the Iconoclastic Fury of 1566, but the Spanish Fury ( aka the Sack of Antwerp) took place only in 1576. Spanish troops operated in Flanders from ca 1567 till about 1700.  Bruegel’s most vertiginously pessimistic paintings, "Mad Meg" and "Triumh of Death",  date from 1561 and ca 1562.  His “Massacre of the Innocents” is usually dated around 1565-1567.
(4)   the position of the divine or the sublime in daily life in the northern regions:  Christ succumbing under his cross, hidden in the midst of a crowd;  Maria on her donkey, just another figure in a winter village
(5)   Huet evokes Alexander Farnese (son of the Governess of the Netherlands) boasting about his “3 good rides on his new bride”
(6)   “an instance of faithful adherence to such characters and incidents as will be found in every village, when there's a meditative & feeling mind to seek after them, or to notice them when they present themselves” (John Dewey in Art as Experience , citing Coleridge on the cardinal points of poetry)

Thank you for that, fff.

T.j. Clark has a book coming out on him soon. My sister went to one of his lectures on Bruegel but I just missed it, unfortunately.

Hi B, are you enjoying the British summer? I looked up TJ Clark's upcoming book. Would that be "Heaven on Earth: Bruegel, Giotto, Poussin, Veronese" ? sounds intriguing, thanks for the tip.
best, fff

Yes, I love the long summer evenings, the ability to hop into a second hand book shop or just roam the streets..more than all that I am, even for a brief moment, close to loved ones.

And how are you?

Am letting seep in the summer stillness (with all the noise temporarily moved to beaches in warmer climes, these low countries actually become quite agreeable). Tomorrow alas back on the chain gang after the holidays.

Hope you will have stocked up on lots of cherished moments & images & books when returning.