Of Ferment & Fragmentation (or: Historical Confusions) 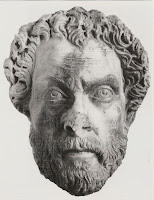 Once upon a time I would read history books with smug complacency, standing safely on the solid shore of peaceful times.   Now I anxiously look for parallels between past turmoil and current discontents, wondering what lessons, if any, we can draw.

The history of Late Antiquity in the Mediterranean world makes for spellbinding reading - and for ponderous brooding, too.  With hindsight, it was a time of structural and irrevocable change. One can only guess what contemporaries made of it all – caught as they were in the midst of ferment  and fragmentation.
In the West: mass migrations (1) followed by an utter fragmentation of the established order (2).
“[in this] kind of no man’s land where previous structures had broken down, [the local elites] were caught between trying to maintain a remembered lifestyle (3) while coming to terms with their barbarian neighbours.”
In the Eastern Mediterranean: intense religious ferment & competition. Surprisingly long lasting pagans and neo-platonic philosophers. Resilient Jews. Many new strands of Christians - ascetics in the desert, holy men on pillars, warmongering monks, fierce bishops engaged in violent theological debates.  Equally violent clashes between the (Eastern) Roman empire and Sasanian Persia.  And then, in the 7th century, with the Islamic conquests yet another new set of rulers.

One shudders at the historical facts of perennial wars & massacres & feuds.

But one looks enraptured at the art historical remains. Enraptured, and confused, too,  by this multi-faceted world with so many cultural overlaps  – Roman, Greek, Hebrew, Syriac, Aramaic, Coptic, Arabic, ….   (4).
(I look at an image, trying to fit it into the illustrated (western) art historical timeline in my head, and fail.  What looks like antique roman might be  6th century, or 10th century... it might have been found in Syria, or in Constantinople, or ….  )

Even on a black& white picture in a second hand book , there was no escaping from his gaze.  A marble head with worried creases, and with large eyes. His eyes were watching … what? Horror, or Eternity?  When I could at last unlock myself from his staring eyes, I read the legend in small print: Proto-Byzantine head, 5th century, Turkey , now at the Brussels Cinquantenaire museum.

So, sleeting rain or not, lazy Saturday morning or not – outside I hurried, catching the first tram that came along, then briskly walking to the museum which was just opening its doors.

On my way to my proto-byzantine head, I met Greek Gods, Roman senators, a mysterious oriental god and  ….  catching my breath…. stopping in my tracks , I stared at a huge classical mosaic floor with vivacious hunting scenes. Rome? Pompei?   No, Apamea  (5) – Syria, 5th century - by an artist who may have worked on the Great Palace mosaics in Constantinople.

On the next floor, I found my Proto-Byzantine head.  Behind him, on the wall: mosaics with dazzling geometrical patterns (from the Apamea synagogue, tells the notice).
On the floor behind him,  mosaics with mythological scenes, dancing girls, and, lo and behold: there is Odysseus finding his Penelope (floor from the Neo Platonic school in Apamea, according to the notice).

Apamea, so I read in the guide, is one of Northern Syria’s mysterious “dead cities” with however a rich archeologic heritage which lives on – having survived wars & earthquakes & fires.

And what does the web tell about Apamea's current fate ? Satellite photos showing hundreds of recent pit-holes pointing to intense illegal excavations & looting.
Commentators lamenting that Apamea’s  rich late antique footprint, having survived for millennia, is now at risk of being wiped out for ever.

Still under the impression of these dazzling late antique images and pondering the fate of Apamea, I decided to walk all the way back home.  Through streets with the usual, familiar Belgian history markers – there, on the corner, one of the many  1st world war memorials with allegorical heroics and fading names – not a village,  not a city borough In Belgium without its monument to commemorate the fallen of ”1914-1918”.

But over there, what is that?   I’m confused by a shiny black new monument, planted firmly in the middle of a small square – it’s a strange mixture of both vaguely familiar and exotic forms. I cross over to read the gilded inscriptions , and gasp at “genocide”.
It’s a “1915” memorial, commemorating the syriac genocide by the ottoman empire. Later I look it up on the web, this particular memorial has been inaugurated in 2015, by the local mayor and by the visiting patriarch of the Syrian-Orthodox church of Antioch. The web also tells me there are about 20.000 Syriacs in Belgium.  And once you know these things - signs multiply.  On yet another walk, in another Brussels neighbourhood – I spot another “1915” memorial, this one erected by the Armenian community in Belgium (6)

So clearly, these are diaspora communities determined not to forget, not to be wiped out for ever without leaving a trace.

More confusion and melancholy in the notes

(1)    Every arrow indicates a people on the move  ... so many arrows swarming over the map of the western Roman empire  - and yet the paradox remains that these newly arrived peoples in fact admired the Roman empire and swiftly converted to Christianity.  Depending on the historian’s own affiliation, these migrations are seen in history books either as hostile invasions or as ill managed natural flows of people. In any case, amongst the range of historical tactics to deal with migrations, the startled contemporary reader recognizes present policies: defence of outside borders, diplomacy & subsidies to keep people from moving across borders, resettlement agreements.


(2)    “Massive barbarian settlements which so fragmented the western empire” […]  The question may indeed be asked why these groups, once settled, did not integrate fully and simply became absorbed. But they had by then begun to develop their own identity, and the answer may be that it was simply too late” (Averil Cameron in  “The Mediterranean World in Late Antiquity”


(3)    Ah, the exquisite melancholy of that phrase, “trying to maintain a remembered lifestyle”.


(4)    “the variety of Christian and pagan practices in Edessa, where a Middle platonic intellectual culture was mixed with a Christian scholastic culture and active pagan cults.”[…]” Syriac culture […] with a distinctive position between the Roman and Persian worlds, […] on the fringes of empire, with a unique relationship to local Judaisms and paganisms”.  Philip Wood in chapter 6 of The Oxford Handbook of Late Antiquity


(5)    A flash-timeline of Apamea  : Roman conquest (Pompey the Great) in 63 BC, devastating earthquake in 115 AD, rebuilt in 2nd C , seat of neo-platonic school in 4th C, capital city of Syria Secunda in the Byzantine empire, new earthquakes in 528, rebuilt by Justinius, sacked by Persians in 573 & 613, conquered by the Arabs in 638, again earthquakes in 12th C , since then mostly deserted,  western archeologic excavations in the 1930s . Following “agreements then in place” (why? On what basis? What role did Belgium ever play in the Middle East?  ) Belgian archaeologists moved some excavated mosaics to the Brussels museum, where parts were ruined by two fires in 1944 & 1946 (what kind of fires? War? Accident? )


(6)    a superficial web search yields an extract from a local Brussels council hotly debating whether or not the Armenian 1915 monument, erected in 2004 , should be destroyed . According to its opponents it commemorates  “ an imperialist invention” .
But back to older massacres and displacements : Late Antiquity historians dilignetly ift through evidence and documentation, trying to gauge the partisanship of the sources. To what extent did Christians persecute pagans and Jews (and vice versa, of course) ? What was official policy, what was popular violence?
“bands of monks […] destroying synagogues and ambushing Jews […] [versus] the laws of 423 that prevented Jewish, Samaritan , and pagan places of worship from being attacked […] . “
What caused the demise of the Northern Syrian cities? Epidemics or Earthquakes? The new Islamic rule? Changing trade routes?    Or droughts & c climate change?  (7)


(7)    The climate scientist Trouet has shown how droughts got the Huns moving and were thus behind  ‘barbarian invasions ’ into Roman territory, and ultimately behind the  fall of the (western) Roman empire . In a recent interview she also linked climate change with the present Syrian refugee crisis - droughts and failed harvests accelerated migration from the countryside to the Syrian cities, further increasing social tensions – and thus acting as an additional catalyst for the civil war.

Hi b.
yes, I definitely read Peter Brown! His book has been amongst the first of a rapidly growing pile of Late Antiquity books (on the window sill :-) ). His "The world of ..." is absolutely captivating - cultural history at its finest.

This week's find has been the work of a Glen Bowersock - erudition & benign melancholy.